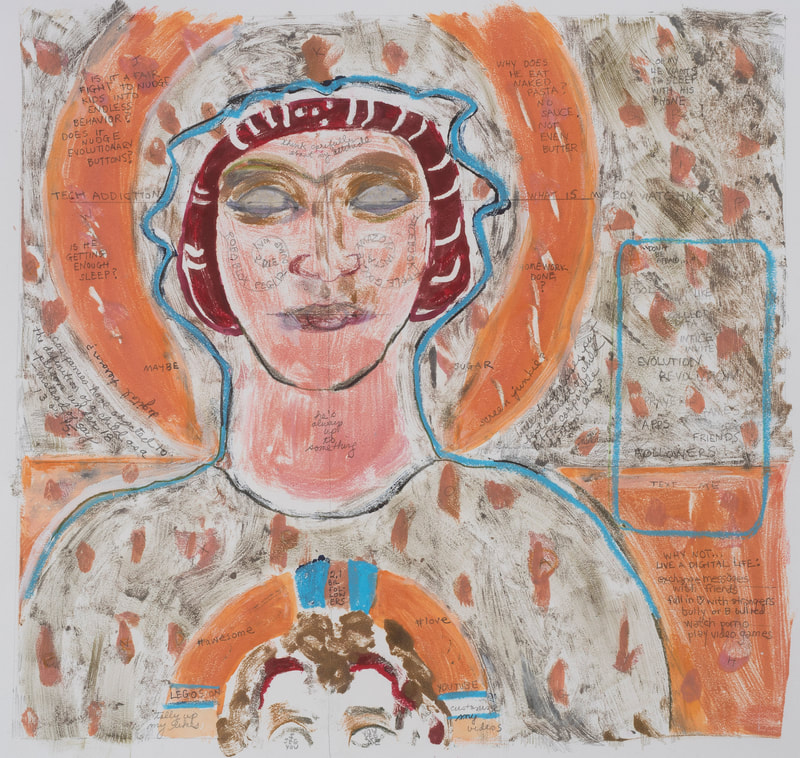 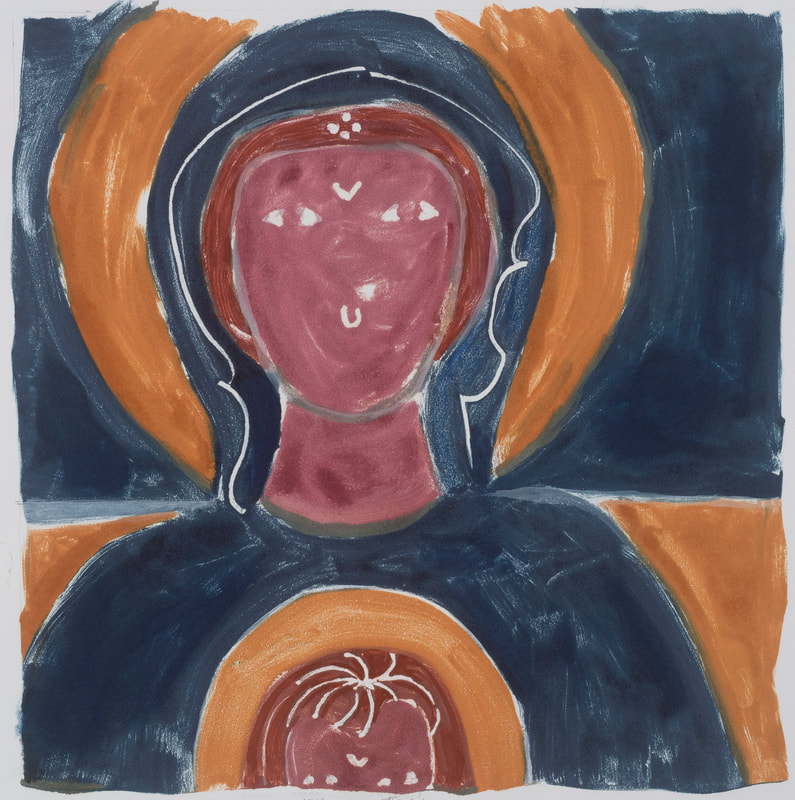 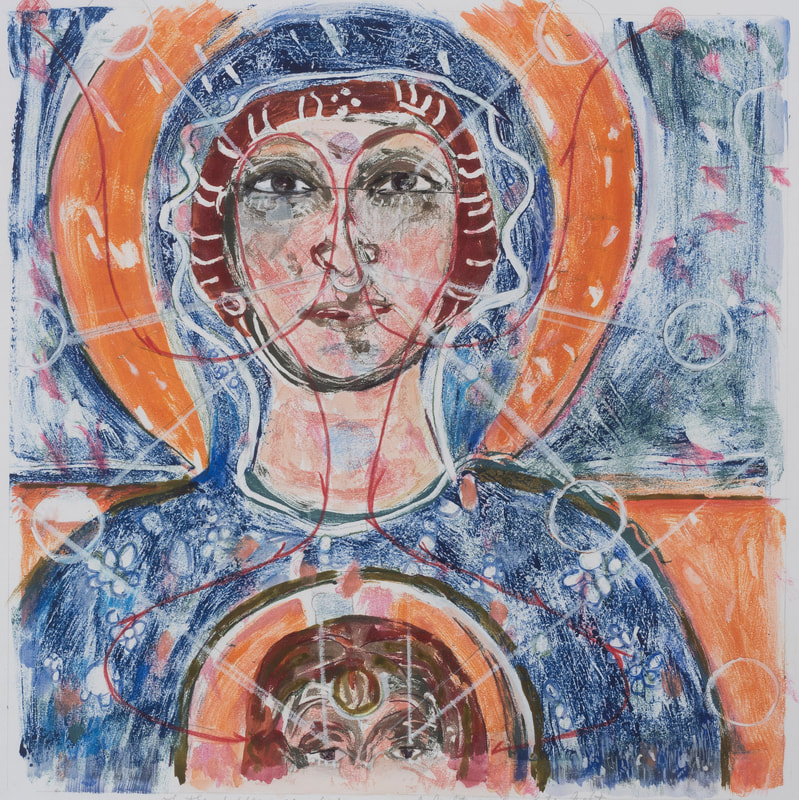 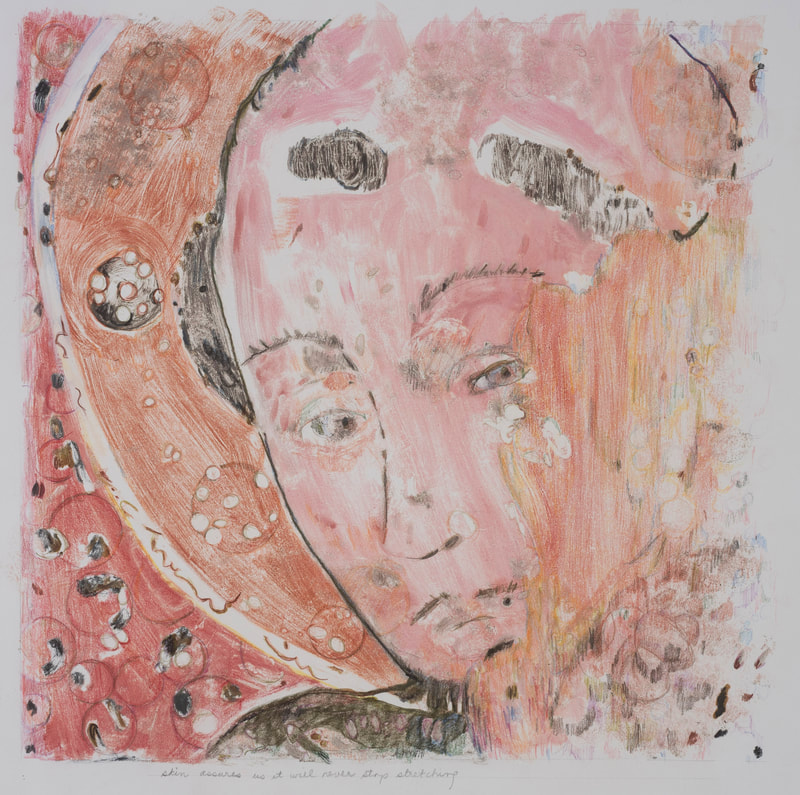 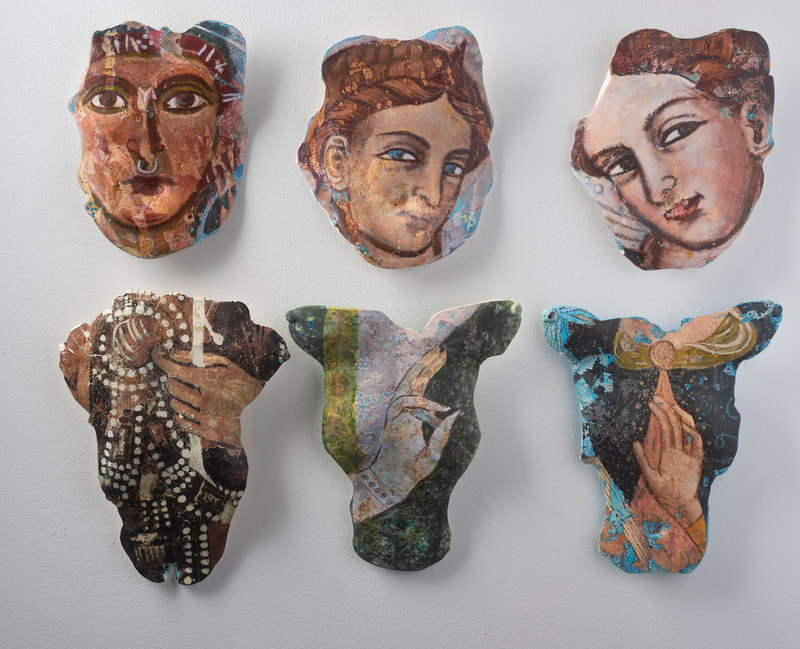 Assembly of Blessings and Guardians, Mixed Media on Plaster 24" x 33", 2019
Artist Statement:
​I like to think about what happens to figurative art as it tumbles through time. Art carries stories about people: what is important to them, what possesses magic, what codifies their class, what gives them pleasure, what makes them laugh.

My journey began as a visual artist and then moved to film, then writing, then back to the visual arts. I learned a lot about the visual world from novel writing. Writing the novel required a lot of witnessing, patience, scrupulous attention to detail and use of the part of my brain that embraced the visual. Visual is primitive; for me, an irrepressible source of energy and movement. Writing does not embrace movement. When I create a sculpture, an installation, or a monotype there’s always a dance that happens between the movement of the body, the polishing of the spirit, the invitation of the Divine, and materials.

Materials? I most often use paper and do all sorts of things to it–-fold, mold, dunk it in plaster, roll ink on it, write on it, transfer it. I use plaster, too, incorporating that material into torso casts and sculptures.
​
The human form and its irrepressible spirit continues to be my object of study. I can’t help but agree with the movie character Yoda when he says, “We are all luminous beings.”

Artist Bio:
After working as both a film camera operator and a writer in New York City, where she covered the emerging video and independent film scene, as well as the 80s downtown art scene. Palamidessi moved to Boston and earned a MA at the Boston University Creative Writing program. She studied with Leslie Epstein, Sue Miller and Aharon Appelfeld. After graduating from the program, Palamidessi taught writing at BU for 13 years and wrote three novels before re-engaging her early visual art training.

“Inside it felt as if a something heavy had been removed from my brain when I shifted away from verbal. A very primal creative spirit emerged." (Writer as Visual Artist” , 2014)

A dream about her husband provoked her torso series. “I saw his torso opening, like a book. Inside were lights and words--not organs, not blood. A universe existed inside. Is this where we carry our stories and love?” she asked.

Palamidessi believes we know if we are artists by the time we’re 4 or 5. “We feel like outsiders, witnesses, people who respond to color, to sounds, breath, perhaps to past lives. That awareness compelled me to learn the skill that I would need to create a life in the arts: draw, write, sculpt. I studied film-making. I got degrees, I found mentors, I apprenticed.” (interview, Les Femmes Folles, University of Nebraska, 2016)

Palamidessi studied with mask-makers andcartapesta artisans in Venice, Rome, and Lecce, Italy.
​
She is a published novelist. “Grandmothers,” her memoir, is engraved on a granite monolith and installed as public art at Boston's MBTA station, Jackson Square, on the Orange Line. She is a long-time Iyengar yoga practitioner and yoga teacher. Her studio is in Somerville, MA.
​
palamidessi.com