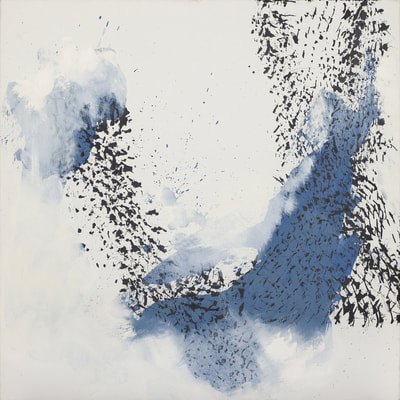 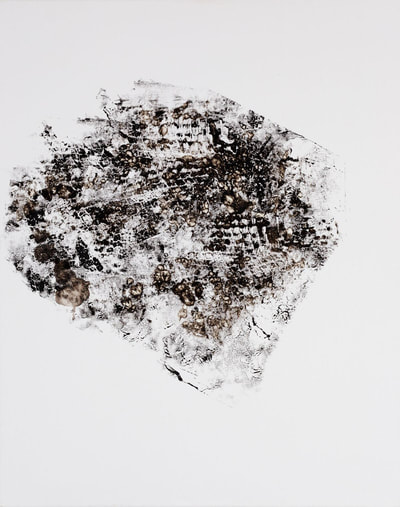 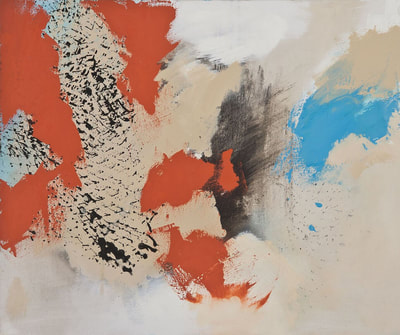 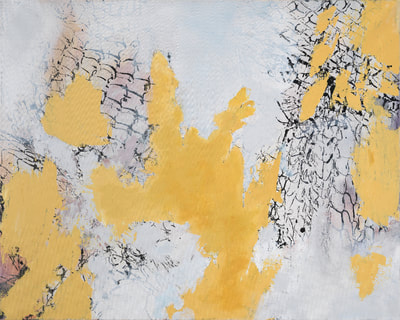 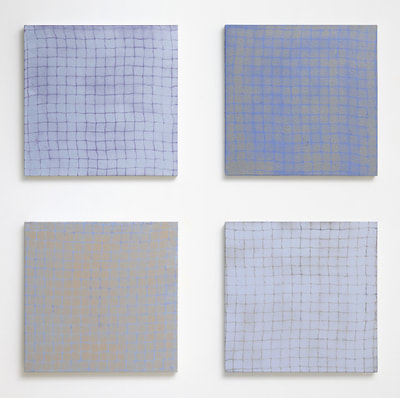 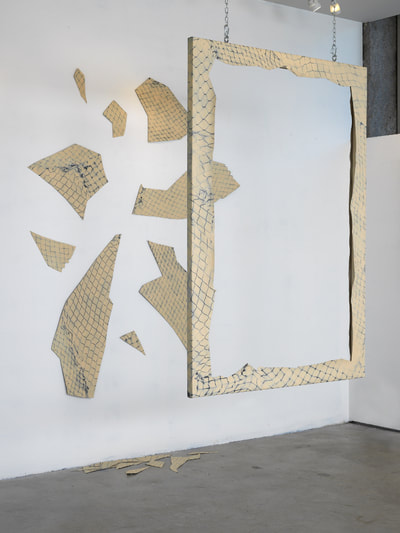 The Net Reconfigured / Breaking Out, installation with frame and cut outs of net painting on support, hanging from ceiling / mounted on wall, 46” x 72” x 30”, 2016
Artist Statement:
My work is an expression of personal and collective experiences, distilled into abstraction. It is process-oriented, to the point that I may be well into a series before it becomes clear what is driving me. That moment of clarity is a gift: It feels as if Art is informing Life. But the reverse may happen, too: Life simply takes over and imposes itself on Art, raising questions, demanding new answers.

A torn fishing net, picked up years ago at Snow Shore on Cape Cod, became both a tool and a catalyzer. Initially, it was about a simple dichotomy: To capture   ̶ or to be caught?  But as I continued to work with nets, exploring different techniques, their appearance and their symbolic meaning kept changing. Throughout these transformations, the netting seemed to represent aspects of the human condition. What changed was my perspective.  Art and Life became intertwined.

My creative work was an attempt to find answers, which in turn raised new questions.  In the process, the net, which had originally represented coercion, gradually turned into a symbol of organic and social cohesion--a cohesion, which is currently severely threatened. But this is not the ultimate answer. As always, new questions may be raised and answers may remain elusive; what counts is the process of probing.
​
Artist Bio:
Barbara Eskin was born in Germany, where she spent her formative years developing a love of nature, art and languages. Nature was a powerful presence in the small village of Barnstorf, and art a faithful companion: At the age of seven she produced a series of drawings of birches, one of which depicted a girl lighting up a tree by shining a flashlight on it. Her fascination with languages developed after she moved to the city of Bremen. She learned five languages and went on to teach English, French and German language and literature in Bremen, Paris, and Boston.

Art, the early companion, became her prime occupation in the 1980s. Together with her family she moved back and forth between the United States, France and Germany, taking art classes on both sides of the Atlantic. Barbara now lives in Brookline and maintains a studio practice in Allston, MA.

​After innumerable figurative drawings and paintings in pastel, watercolor and oil, she felt that the time had come to find her own visual language. Creating a likeness had lost its allure. Instead, she aimed straight for the underlying truth and the emotional effect an image could produce, addressing fundamental human experiences in abstract compositions. This change in focus produced an interesting side effect  ̶ enhancing her understanding of literature.
​
barbaraeskin.com