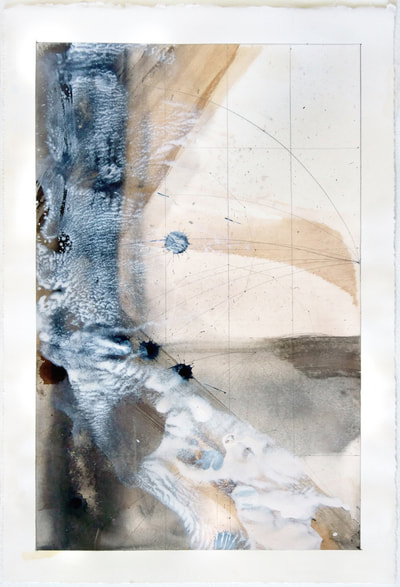 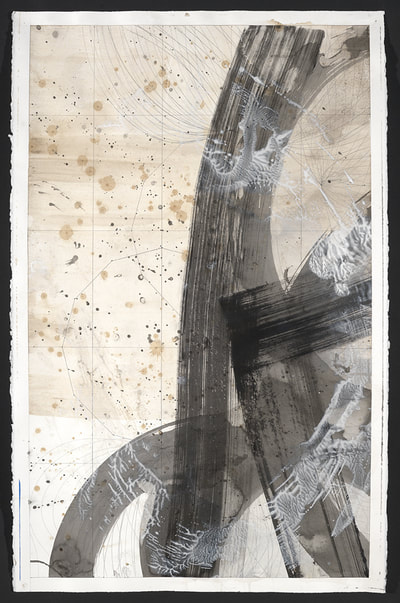 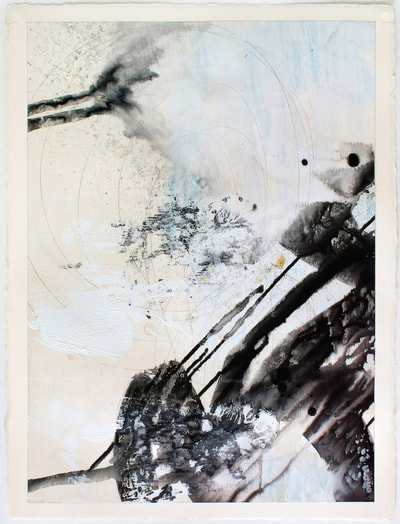 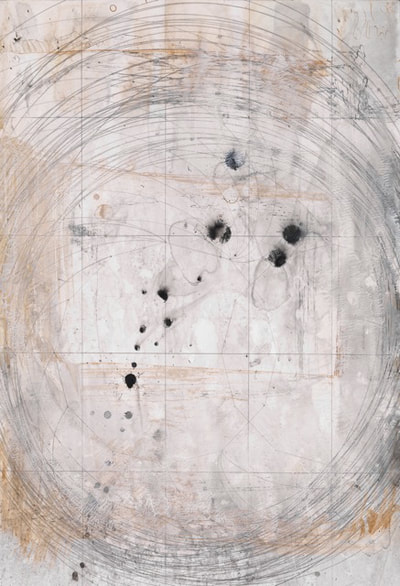 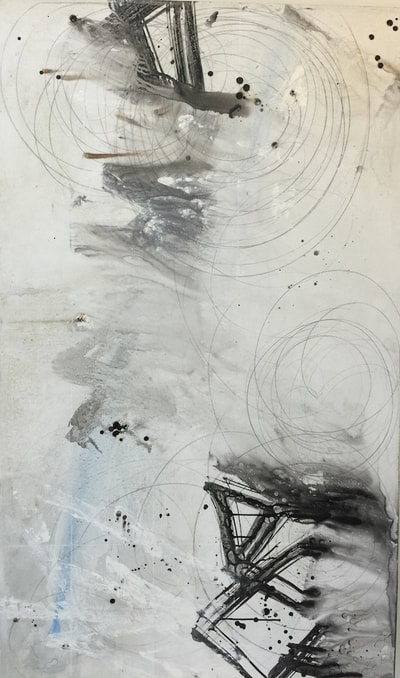 Tantric", 68" x 40", acrylic, ink, pencil on canvas
Artist Statement:
The painting and drawing in this series investigates geometric designs, derived from traditional geometric patterns, reduced to their most elemental shapes. These recurring shapes form the subtle underpinning of the drawing, which gets revealed and obscured by fluid gestural improvisation­­­­s. The series combines two modes of working. Each piece begins with logical, orderly line work followed by layers of washes, splashes and strong brushwork, allowing for the chance interplay of wet media and drawing.  The joining of the two methods, the orderly drawing and the flowing, spattered paint, suggests a dynamic flux.

The elemental patterns, whose center emanates from the grid, are the tangible forms that currents of spontaneous drawing stream around and mix with the flow of the washes and spatters, creating a freeze-frame image of flux and stasis between the sharp lines and expressive fields.

The physicist David Bohm titled a paper, “Implicate Order”, where he posits that all separate objects and events in the visible world are actually temporary “subtotalities” derived from “a deeper implicate order of unbroken wholeness.” Bohm draws an analogy to a flowing stream: “ on this stream, one may see an ever-changing pattern of vortices, ripples, waves and splashes which evidently have no independent existence as such. Rather they are abstracted from the flowing movement, arising and vanishing in the total process of the flow.”

The drawings are a visual response capturing an image of a fraction of a second caught in an imaginary universe made of subtle order and chaotic manifest form.
​
Artist Bio:
Born in Middleboro, Massachusetts and raised in Indiana, Shelley Loheed attended The School of the Museum of Fine Arts, Boston from 1978 through 1984. While there, she was teaching assistant to the photographer Bill Burke, and was subsequently hired as his personal darkroom assistant. In 1982, she received a Bachelor of Fine Arts at affiliate Tufts University, and her diploma from the Museum School in 1983. There, as a fifth year graduate student she also co-taught photography with Sandra Stark.

Upon completing the Fifth year Program at the SMFA in 1984, Shelley was the recipient of the Clarissa Bartlett Traveling Scholarship, and traveled to Indonesia, which has since had a continuing influence on her work.

She was a finalist for the Massachusetts Council of the Arts and Humanities Fellowship in 1987, and was also instrumental in establishing a permanent artist live-work building in Boston’s South End in 1989. She became a certified Kundalini Yoga instructor in 2000, and has been teaching yoga and meditation to artists since that time.

Her work is included in the collections of the Boston Public Library, The Museum of Fine Arts in Boston, and the DeCordova Museum in Lincoln, Massachusetts. Boston’s Artsmedia called her recent drawings the highlight of The Revolving Museum’s “Home-made Show” (2002) and wrote they were “…gorgeous, ethereal drawings in which cryptic markings—ranging from simple geometries to botanical forms—are washed with sheer layers of delicate color.”
​
shelley-loheed-art.com